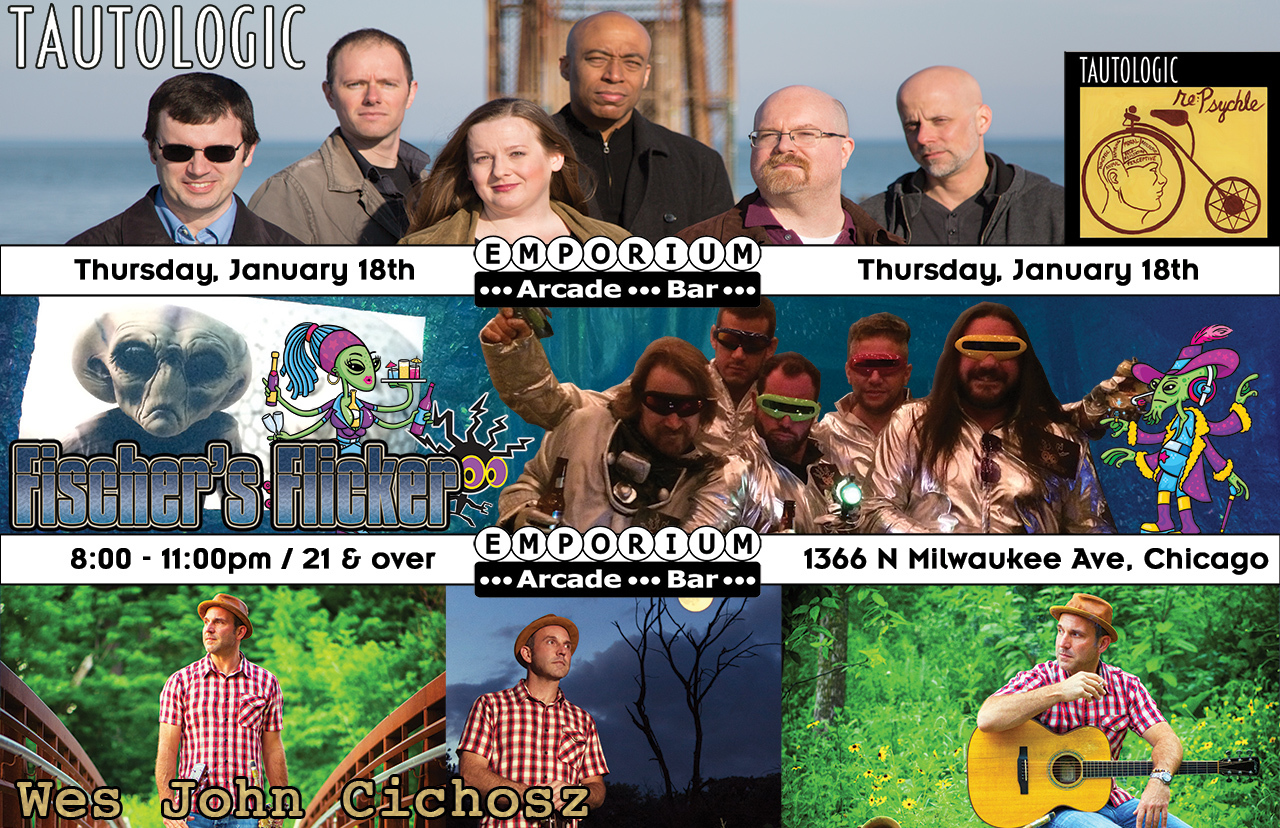 Hey! You there! Yeah, you; the one staring at the screen.

Two weeks ago, you resolved that you were going to cut back on your social media addiction in 2018. You hit rock-bottom, arguing politics with some friend-of-a-friend-from-high-school on Facebook at 3AM with your second double-sized gin and tonic at the ready, Googling factoids on Wikipedia, HuffPo, or wherever to make some minuscule point because someone on the Internet was wrong.

Oh, that wasn't you? Nonsense. That was totally you. It was also totally me. My name is Ethan Sellers from the band Tautologic and I have a social media addiction.

Well, now that the delirious social media rush of 2016 and the punishing hangover of 2017 are both over, we have to do something and we have to do it in person.

On Thursday, January 18th, 2018, you will go to Emporium Arcade Bar in Wicker Park to catch three seriously over-qualified bands play their hearts out. You will go there at the working person-friendly hour of 7:45PM, get your delicious craft beer/cocktail, and settle in for three punctual sets of face-melting music beginning at 8PM.

You will leave that evening, possibly later and drunker than you intended, and the next day you may be hung over but, oh the stories you will tell! You did things while your co-workers "liked" things and binged-watched television alone in dark rooms.

Here's who will entertain you for your hard-earned cover of zero dollars (it’s a FREE show!):

Headliner Wes John Cichosz has shared the stage, recorded with, and/or opened up for a ton of my own musical heroes including Maceo Parker, Smashing Pumpkins, Umphrey's McGee, Phil Collins, Adrian Belew and Guster. Wes's 2017 album The Moon Threads a Needle blends eclectic influences and rock-solid playing from a band packed with A-list Chicago musicians.

Fischer's Flicker's ambitious compositions on its 2017 album Open 28 Hours sound like a "diverse mix tape from an alternate '80s scene on another planet," according to blogger Anne Carlini. The band's goofy sense of humor and go-getter energy play counterpoint to music that has been called “A gorgeous songwriting journey” (by tour manager/guitar tech Andre Cholmondeley) with “Smart orchestrations, wonderful piano themes & classy melodies.”