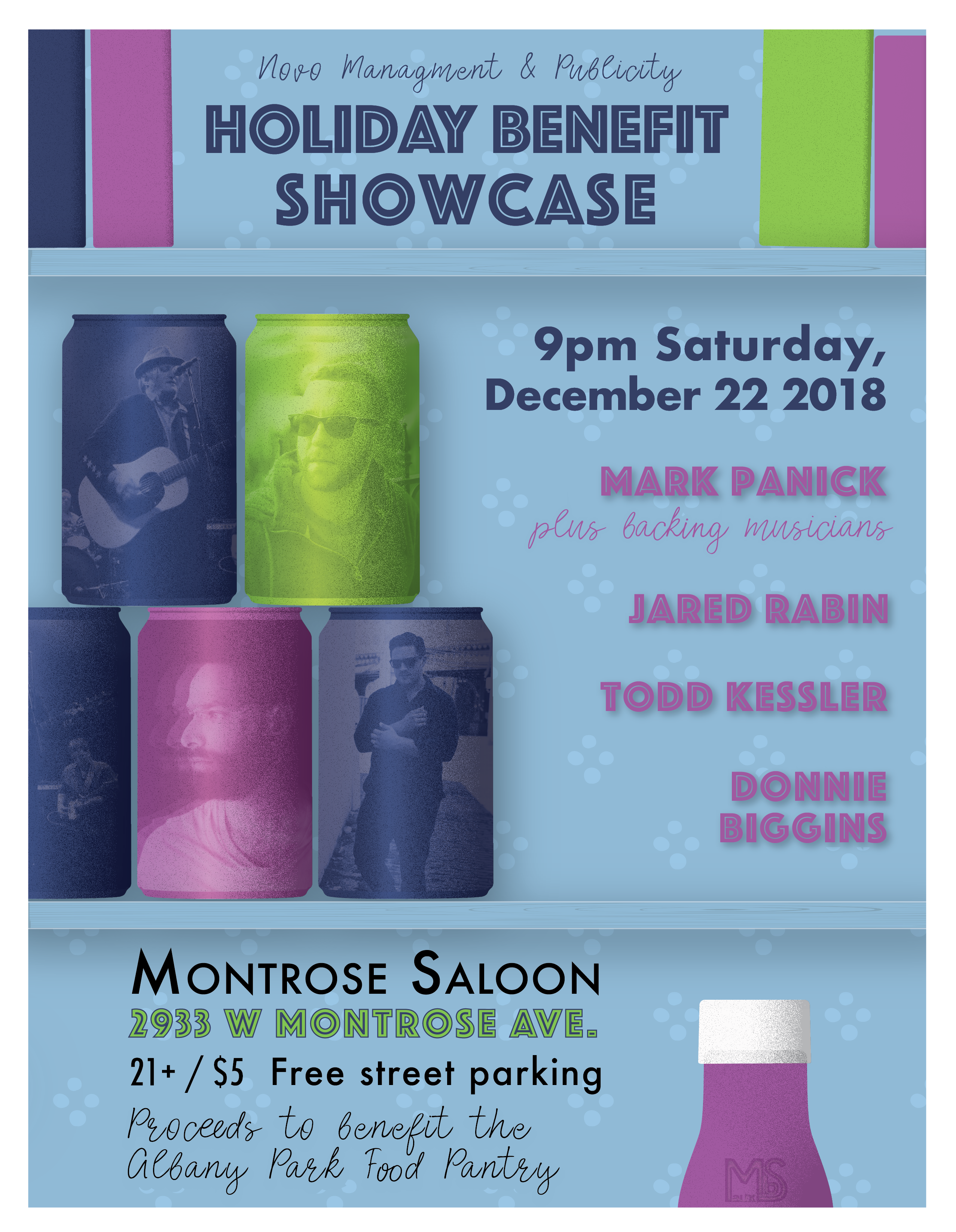 My name is August Forte and I am a Chicago-based music publicist. Over the years, I have had the pleasure of working with some of the best emerging artists and bands from around the country and have been promoting shows and helping out with press and marketing at Montrose Saloon for the past several months.

Montrose Saloon has been one of the city’s best small venues since Eric Chial and his partners took ownership a little over a year ago and it has been a blast helping spread the word about their shows. Montrose Saloon presents music nearly every night of the week and the programming is terrific: Americana, power pop, garage rock, indie bands and DJs spinning vinyl in an intimate room makes for a great night out! The shows during the week are free and the cover on Friday and Saturday nights is usually just $5, so patrons should have some extra dough to tip the hardworking bartenders and buy merch from the bands.

On Saturday, December 22, I am promoting an event via Novo Management & Publicity, the company that my business partner and I run, and I am thrilled to announce a fantastic line-up to benefit a great cause: Mark Panick, Jared Rabin, Todd Kessler and Donnie Biggins will each be playing a set and the $5 cover will go to the Albany Park Food Pantry.

Mark Panick is a Chicago-based musician, bandleader and songwriter best known for fronting the underground rock groups Bonemen of Barumba (who appeared on the 1982 cassette compilation Sub Pop 7 and were featured on BBC Radio One’s The John Peel Show), Black Friars Social Club and Razorhouse, who have appeared on JBTV and whose music and videos have been featured via Chicagoist, The Deli Magazine, The Minimal Beat and Radio One Chicago.

Jared Rabin’s debut record Something Left to Say was called "An Americana masterpiece" by American Songwriter magazine. The title track won 'First Place: Folk Song' in the 2016 USA Songwriting Competition and the self-produced record reached #15 on the Roots Music Report's Americana Radio charts. Rabin's latest EP, Wondering About the Weather, came out on May 11, 2018. Midwest Action called it "unabashedly honest and warm; nothing short of a great album." It was one of the Top 50 Country/Americana albums on the RMR charts for most of the summer of 2018.

Calling Todd Kessler a singer-songwriter simply wouldn’t do him justice. The rising folk-rock star is the consummate storyteller with a remarkable ability to take listeners on a winding, wonderful and introspective journey through the depths of the human experience. Kessler’s latest album, About Memory, was released on November 3, 2017. It was recorded in Los Angeles at New Monkey Studio (made famous by Elliot Smith), produced by Marc Daniel Nelson (Fleetwood Mac, Colbie Caillat) and Ran Jackson (Katy Perry, Goo Goo Dolls) and mastered by Eric Boulanger, who has worked with industry titans Adele, Green Day, and Neil Young.

When I first began planning the Novo Management & Publicity Holiday Benefit Showcase, I asked my good friend Bill Steffey (whose wife Maureen Boyle designed our show poster) to suggest a neighborhood organization that we could donate the proceeds to and he immediately mentioned the Albany Park Food Pantry, which provides food for those in need while striving to end hunger in our community.

I hope that you can join us for a night of live music to benefit a great cause; see you on Saturday, December 22 at 9PM!